As you may have seen in my Nvidia GeForce RTX 2060 review yesterday, Nvidia's latest graphics card is really quite powerful. Despite being around £100 / $100 more expensive than its immediate numbered predecessor, the GTX 1060, the boost in speed you get from the RTX 2060 is absolutely worth it in my books, especially if you're looking for a capable 2560x1440 card that can do pretty much everything at max settings without breaking a sweat. And to show you just how nippy it is, I've gone and made some nice, lovely graphs for you.

To see how each card stacks up, I've put them through pretty much every game I currently use as part of my general benchmarking suite along with my trusty Intel Core i5-8600K CPU and 16GB of RAM. That includes Final Fantasy XV, Monster Hunter: World, Shadow of the Tomb Raider, Assassin’s Creed Odyssey, Total War: Warhammer II, Forza Horizon 4 and The Witcher III. I've also tested them at both 1920x1080 and 2560x1440 resolutions to see what's possible with every graphics setting maxed out (except Final Fantasy XV, where I kept all of Nvidia's extra effects such as HairWorks, TurfEffects, ShadowLibs and VXAO turned off).

The cards in question are the Nvidia Founders Edition of the RTX 2060, and Asus' 6GB GeForce GTX 1060 OC 9Gbps Edition, the latter of which, for the record, doesn't actually seem to be available any more but is the only GTX 1060 I currently have to hand. However, with default base and boost clock speeds of 1594MHz and 1809MHz, this Asus model definitely sits at the upper-end of the 6GB GTX 1060 scale - second only to EVGA's SSC Gaming ACX 3.0 and Asus' ROG Strix OC Gaming cards - so it should still give us a pretty good idea of how the RTX 2060 compares to the very best and most expensive GTX 1060s that are currently available.

Let's start with 1920x1080 performance. As you can see from the graph below, the difference is really quite stark. The GTX 1060 was always a very good choice for maximum 1080p gaming, but some of today's tough guys are really quite taxing on it. In most cases, I only had to drop the quality settings down a peg to get back up to 55-60fps (or, in the case of Shadow of the Tomb Raider, just tweak the anti-aliasing settings a bit), but goodness me just look at all those big numbers on the RTX 2060. 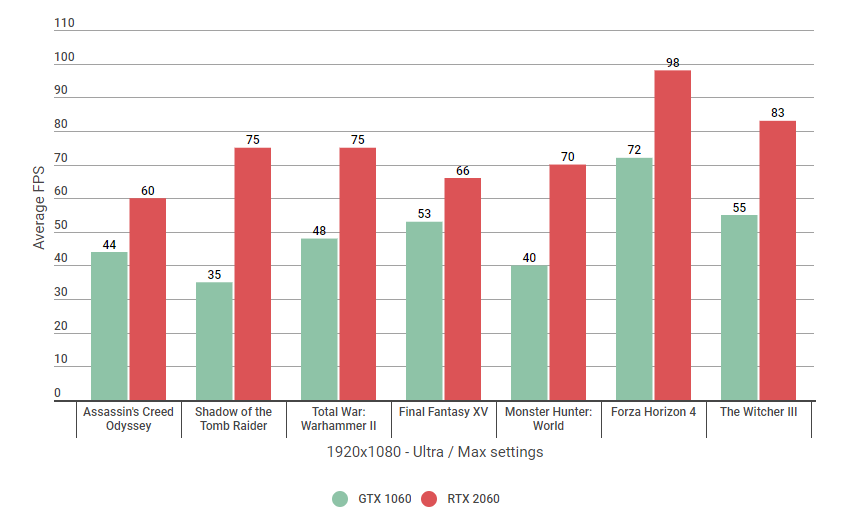 Going back to Shadow of the Tomb Raider for a moment, this is easily one of the most startling results of the lot, as those average frame rates are based off having its maximum, and really very taxing, SMAA x4 anti-aliasing engaged in the game's performance-tanking Cozumel Caves sequence right at the start of the game.

That's a stunning victory for the RTX 2060, as it's effectively turned something that's barely playable in that particular state into a silky smooth beaut. I'm not saying Shadow of the Tomb Raider is completely unplayable on the GTX 1060 on its Highest graphics setting (as mentioned above, I only had to knock the AA down to its next SMAAT x2 setting to get a much more agreeable average of 55fps), but if it's absolute perfection you're chasing at this resolution, the RTX 2060 is definitely the superior card in this respect.

The same goes for Total War: Warhammer II, Monster Hunter: World and Assassin's Creed Odyssey, which all broke the 60fps boundary with ease on the RTX 2060, instead of trundling around between 40-50fps on the GTX 1060. Again, you only need to go down one graphics preset to get a smooth 60fps on the GTX 1060, which in most cases still looks pretty damn decent, but if you've got a high refresh rate monitor at your disposal, then the RTX 2060 is definitely going to be able to make more use of it at maximum settings than the GTX 1060 is on High.

Now we get to the real meat of the issue, as while the GTX 1060 is still a perfectly decent card at 1080p, its performance at 2560x1440 leaves a little to be desired in the old shiny graphics department. It's still a good choice for 1440p gaming as long as you don't mind playing on Medium settings for the most part, but if you've been feeling like your GTX 1060 is starting to show its age a bit with recent games, there is some very good news to be found in the RTX 2060. 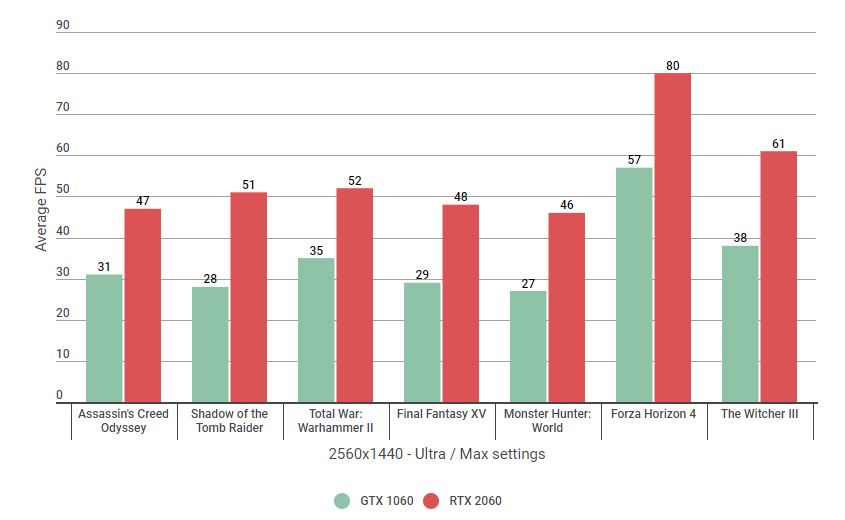 As you can see, most of today's big blockbusters simply aren't playable on the GTX 1060 at maximum settings. Three out of seven didn't even make it to 30fps, and another two only just about made it over the other side of that 30fps parapet.

The RTX 2060, on the other hand, makes the unplayable playable, offering improvements of at least 50% in a lot of cases, if not up to 80% in Shadow of the Tomb Raider (which, again, is with its top SMAA x4 anti-aliasing in effect).

All right, I'll admit it's not a completely perfect average of 60fps in most cases on the RTX 2060, although a lot of games did, in fact, hit that number occasionally during testing. But when you previously had to fork out closer to £420 / $480 to the same level of performance from the GTX 1070Ti (which hit almost identical figures to the RTX 2060 in every game listed above, I might add), that's still pretty good going considering the RTX 2060 costs around two thirds of that.

That's a pretty compelling set of results in my books, and almost certainly what you should consider upgrading to if you're a current GTX 1060 owner who wants to get more out of their 1440p monitor, which is why it's my new favourite graphics card in our 1440p category. Personally, I think it's also the card that GTX 1070 owners should consider upgrading to if they're unhappy with their current level of 1440p performance, but I'll be doing a separate, graph-laden comparison article for that card and its Ti counterpart very shortly.

If you've still only got a 1080p monitor, though, I think the GTX 1060 will continue to serve you pretty well for the foreseeable future, especially if you're not that fussed about having the shiniest, prettiest graphics. You may feel it's worth taking the plunge if you've got a flash, high refresh rate monitor that can do up to 120Hz or 144Hz, for example, but for regular 60Hz peeps where all you're ever going to see is 60fps, I reckon the GTX 1060 will do you just fine for the time being.

The RTX 2070 might be the mid-range flagship of the latest Turing set of graphics cards, but their prices keep them out of the reach of most entry-level PC gamers. On the other hand, the RTX 2060 is closer to being reasonably affordable at a price tag of $ 350. The good news is, with the release of the RTX 2060 SUPER, the RTX 2060 's price is getting more discount.

NVIDIA ’s xx60 cards have always been defined by entry-level prices with performance that knocks on the door of mid-range graphics cards – especially when overclocked. After taking the time to fully test the Turing graphics card inside the RTX 2060, we can say without a doubt that it continues the trend. The RTX 2060 is much more expensive than the GTX 1060 6GB as it costs a whopping $ 350. Compare this to the GTX 1060 6GB, which came originally at a price of $ 254. Meanwhile, the AMD closest equivalent card is the RX 5700 which costs $ 349.

Fortunately, gaming performance was quite impressive. The RTX 2060 consistently delivers great frame rate increases over the GTX 1060 6GB and it really justifies an upgrade. For 1080p Full HD, we were able to play Marvel's Avengers, Borderlands 3, Anthem, Need For Speed: Heat, Call of Duty: Black Ops Cold War at 61 fps to 82 fps and kept frame rates hovering around 71 fps.

Judging by the results of synthetic and gaming tests, Technical City recommends

since it shows better performance.

Should you still have questions concerning choice between the reviewed GPUs, ask them in Comments section, and we shall answer.

(She) Try, that's so good. Well done, smart girl. AAAA how nice, like that yes yes, don't stop. Fondle my clitoris like that, smart girl.

My name is Katya. I live in the city with my dad and mom. I am twenty two years old. I study in.

Hmmm. - Karina closed her eyes dreamily. Meanwhile, I took off my shoes and walked into the room, in the middle of which there was a table covered with. A huge piece of polyethylene - Karina had already prepared a springboard for our entertainment. I split quickly.

" My voice dropped and trembled a little. You looked at your watch - it was early seven. Almost two hours passed for me for coffee, which had time to cool down, and you did not have time to notice it. Then you realized what upset me (and how upset!), And laughed with relief. He pulled him to him, kissed him on the forehead and said.

Most expensive cheeto ever sold

The chaser war on everything