The tradition of Christmas Carols dates back as far as the thirteenth century, although carols were originally communal songs sung during celebrations like harvest tide as well as Christmas. It was only later that carols began to be sung in church, and to be specifically associated with Christmas. Traditionally, carols have often been based on medieval chord patterns, and it is this that gives them their uniquely characteristic musical sound. Some carols can be traced directly back to the Middle Ages, and are among the oldest musical compositions still regularly sung.

I have made adorable printables for lyrics of some of very popular christmas carols and songs. You can share these cute printables with your family, friends, neighbours or anyone who is interested in caroling. With these carols lyrics anyone can sing along with rest of the carolers. Click on any of the carols image and save the bigger version to your computer and print it right away. You can also make a Carols and Songs book with all these lovely printables and share with others as a Christmas gift. 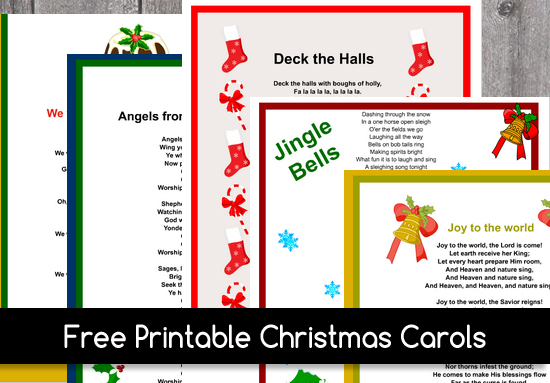 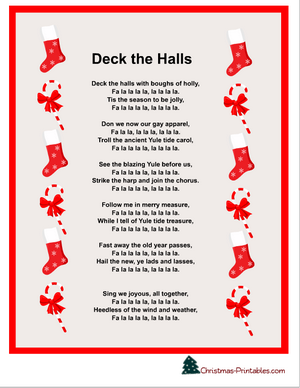 This is free printable lyrics sheet of one of the very popular Christmas and new year carols 'deck the halls'. The sheet is decorated with beautiful images of Christmas stockings and candycanes. 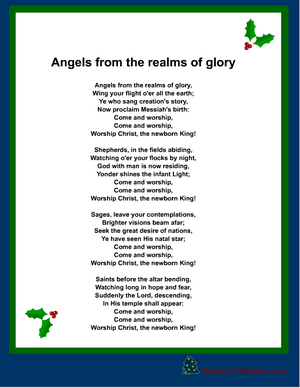 Angels from the Realms of Glory Carol Printable

Click on the image shared above to save the printable version of this very popular Christmas Carol. The design is decorated with mistletoes and a green border.

Angels from the realms of glory
Wing your flight o'er all the earth;
Ye who sang creation's story
Now proclaim Messiah's birth Here is a free printable of best known and most commonly sung Christmas song in the world and this song was being constantly played in my mind while I was working on the graphics of this website. I have made a lovely printable version for its lyrics decorated with images of Santa, a Christmas tree, lots of snow flakes and yes a Christmas bell. Click on this beautiful image shared above to save the bigger printable version to your computer. 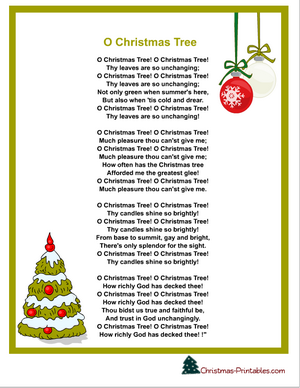 This is free printable lyrics sheet for another one of my most favorite Christmas Carols O Christmas Tree. I have decorated this printable with image of a cute tree and Christmas ornaments design. This cute page will add charm and fun to your carols book. The 12 days of Christmas Printable Lyrics

Sing about the series of increasingly grand gifts given on each of the twelve days of Christmas with the help of this cute and free printable Christmas Carol Lyrics sheet. Simply click on the image shared above and save the bigger image to your computer. This is a fee printable lyrics sheet for The Christmas song or Chestnuts Roasting on an Open Fire . This beautifully designed Christmas Carol lyrics sheet is decorated with images of a Santa Claus, Christmas tree, lots of snow and mistletoes. 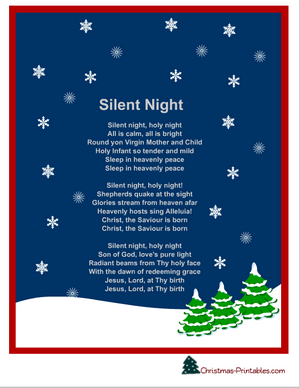 Another beautiful carol to sing along and another beautiful printable image to look at. This carol lyrics sheet is decorated with images of trees in snow and lots of snowflakes at night time. 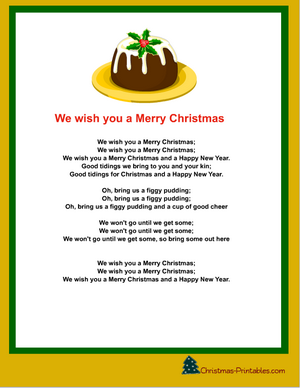 We wish you a Merry Christmas

At the end here is a beautiful free printable and we really wish you a Merry Christmas and a Happy New Year. :)

This Christmas you might need the exact lyrics to all the wonderful festive songs and traditional Christmas songs you&#;ve known your entire life. Although some classics are easy as ABC, some others have slightly more complicated lyrics and are often misheard.